10 stools – 10 decades (1998)
“It was my take on 20th century design history. I never imagined things would come off as well as they did with my graduation project. The exhibition was on world tour for six years or so and was seen by more than a million people. For me personally, the highlight was a letter from Rolf Fehlbaum, owner of the global furniture brand Vitra, congratulating me on what he saw as an exceptional graduation project. The exhibition turned out to be my entry point to applied and industrial design”, Alexander says.

Twentieth centrury design from my point of view

We are on the theshold of the new millenium and I wait with bated breath for what it has to offer. How will design evolve? Which materials will be used_ How will I change and progress? For my finals I have chosen to investigate the past in order to prepare for the future.
I have illustrated the past by making ten different stools, one for each decade. I started planning this project a year  ago, May 1997. I have studied art and design books and visited museums. I have seen films with typical environments of the period and decade, and scoured through magazines for pictures in order to learn how to distinguish the decades from one another. When I became familiar with the different styles I started drawing.
Now that the project is completed, I have learnt a great deal about our history of design and created ten different stools, each representing its own epoch – through my own interpretation. 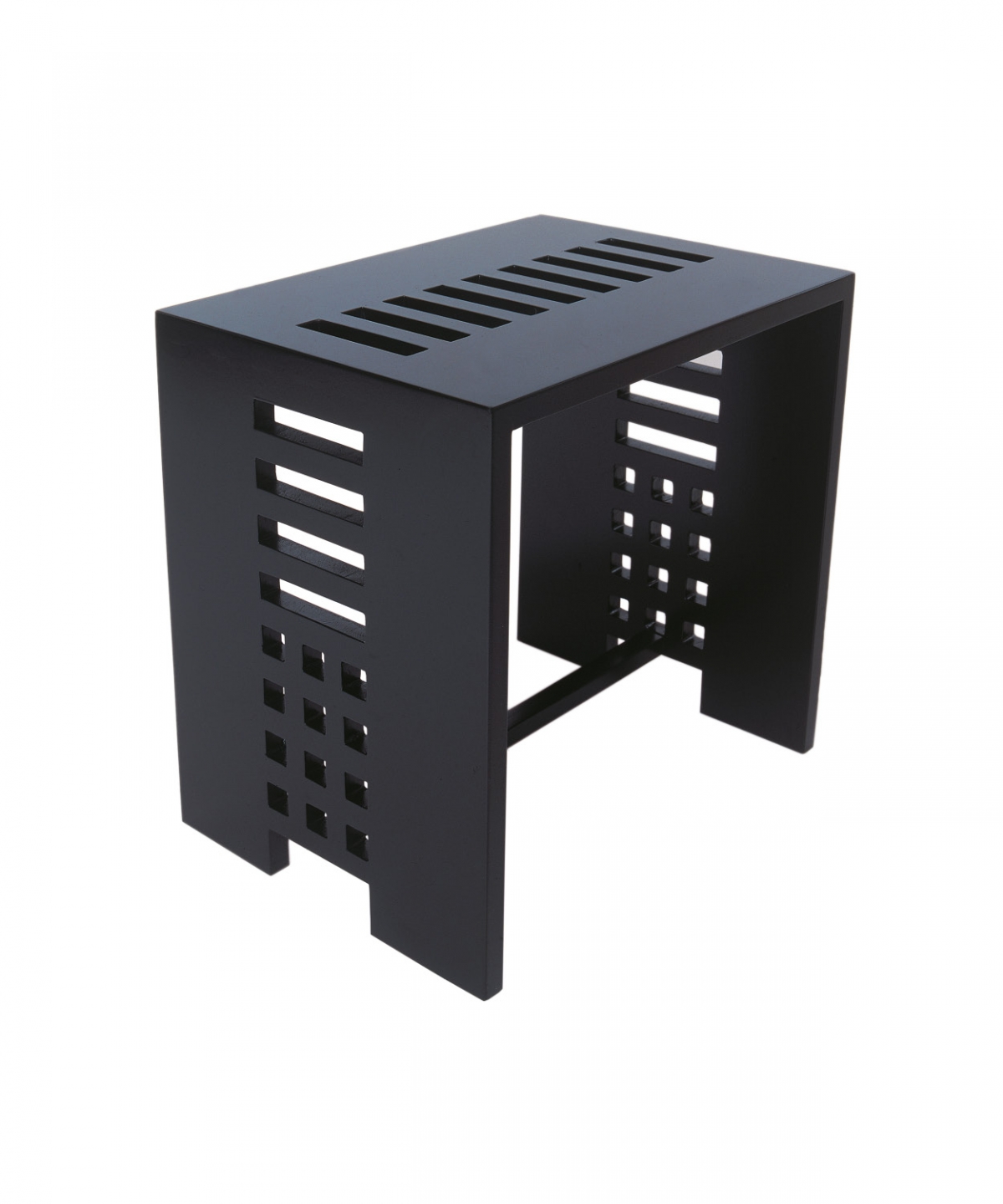 Turn of the century

Design during the turn of the century was characterised by the relationship between human and machines. Artists started collaborating with industry and became designers. Modern designers abandoned the Jugend style. Adolf Loos, one of the great opponents of Jugend wrote: «Don’t cry. It is the grandeur of our time not to bring forth ornaments. When ornaments no longer stick together with our culture, it no longer gives expression for our culture».
My inspiration from the first decade of the twentieth century comes mainly from the designers Frank Lloyd Wright, Josef Hoffmann and Charles Rennié Mackintosh. Their simple geometrical forms had a beautiful graphic expression. 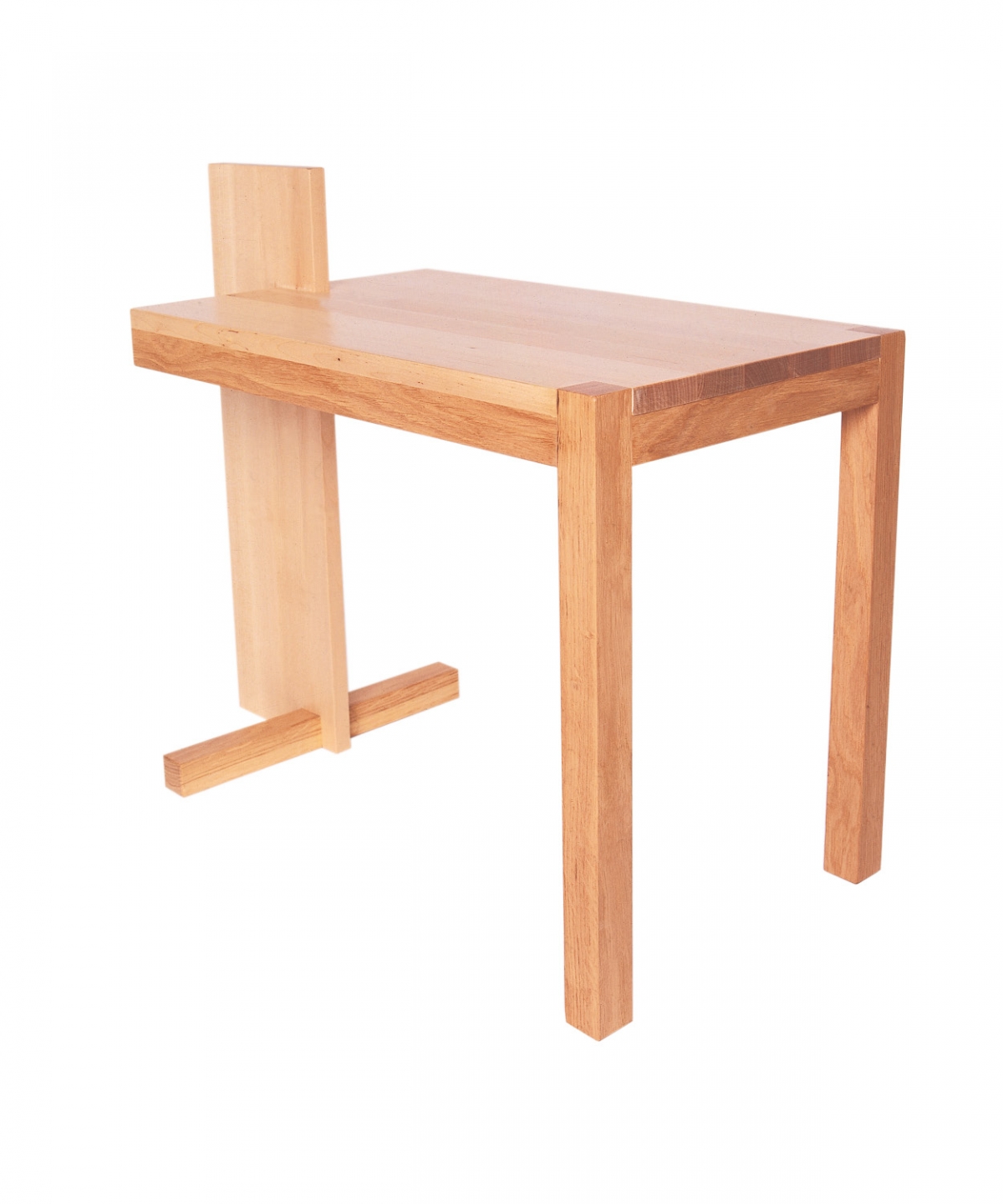 During the first ten years of the century the collaboration between architects, artists and industry was in full bloom. Contstruction was standardised and mass-production became the new way of working.
My strongest source of inspiration from this decade is Gerrit T. Rietveld. His way of building up forms between different levels and directions is truly fascinating. The furniture he created had to be both airy and comsume as little space as possible. His ‘blue and red chair’ is his most famous work of art, as well as my biggest inspiration. That chair also served as a model for many of the desigers during the twenties. 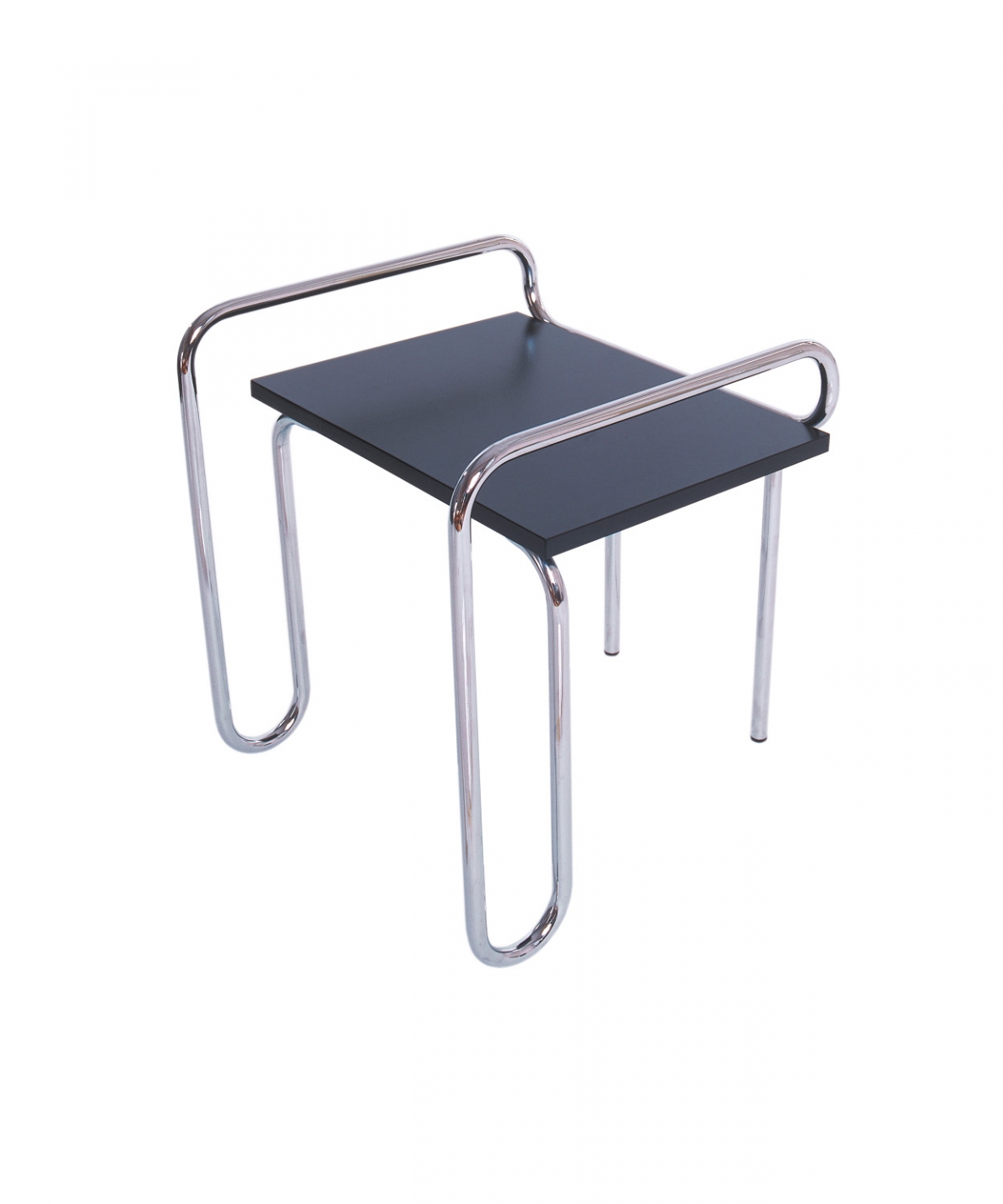 This decade was dominated by The School of Bauhaus and bu the new fashion of using steel-pipes when building furniture. A completely new style was born. The handlebars of a bicycle inspired Marcel Breuer when making the chair’Wassily’, named after the teacher Wassily Kandisky at The School of Bauhaus.
I was inspired by Marcel Breuer, Le Corbusier and Ludwig Mies van der Rohe who, despite simple forms, enhanced the feeling that furniture is something more than just furniture. 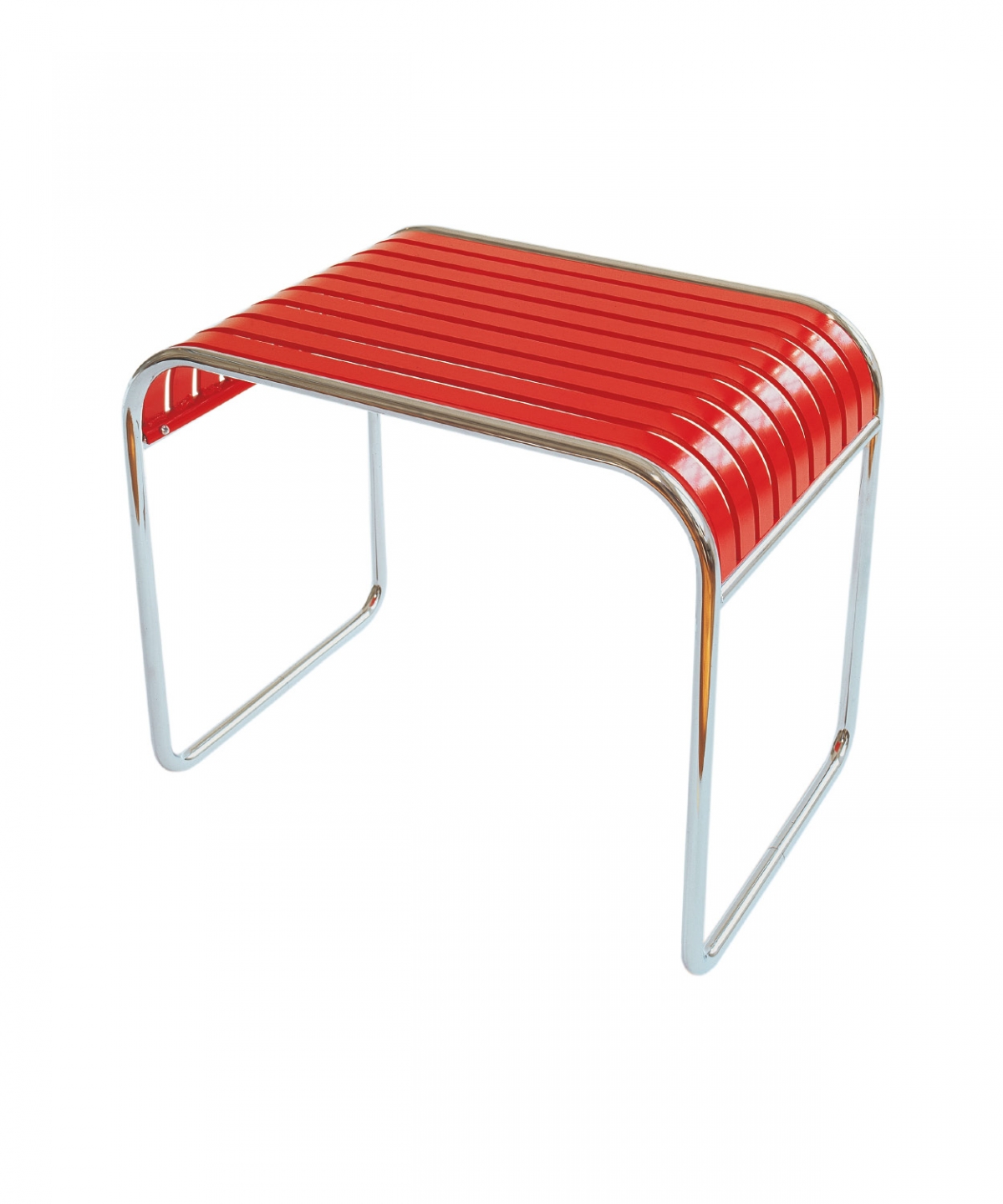 Steel-pipe furniture was still fashionable. Pressed wood broke through and the Finnish designer Alvar Aalto was a pioneer in exploiting its possibilities.
Alvar Aalto, René Herbst and Ludwig Mies van der Rohe were the most important role-models for my stool illustrating the thirties. But my inspiration also derives from the lines and forms of ‘the turquoise bed’ by Louis Sognot. 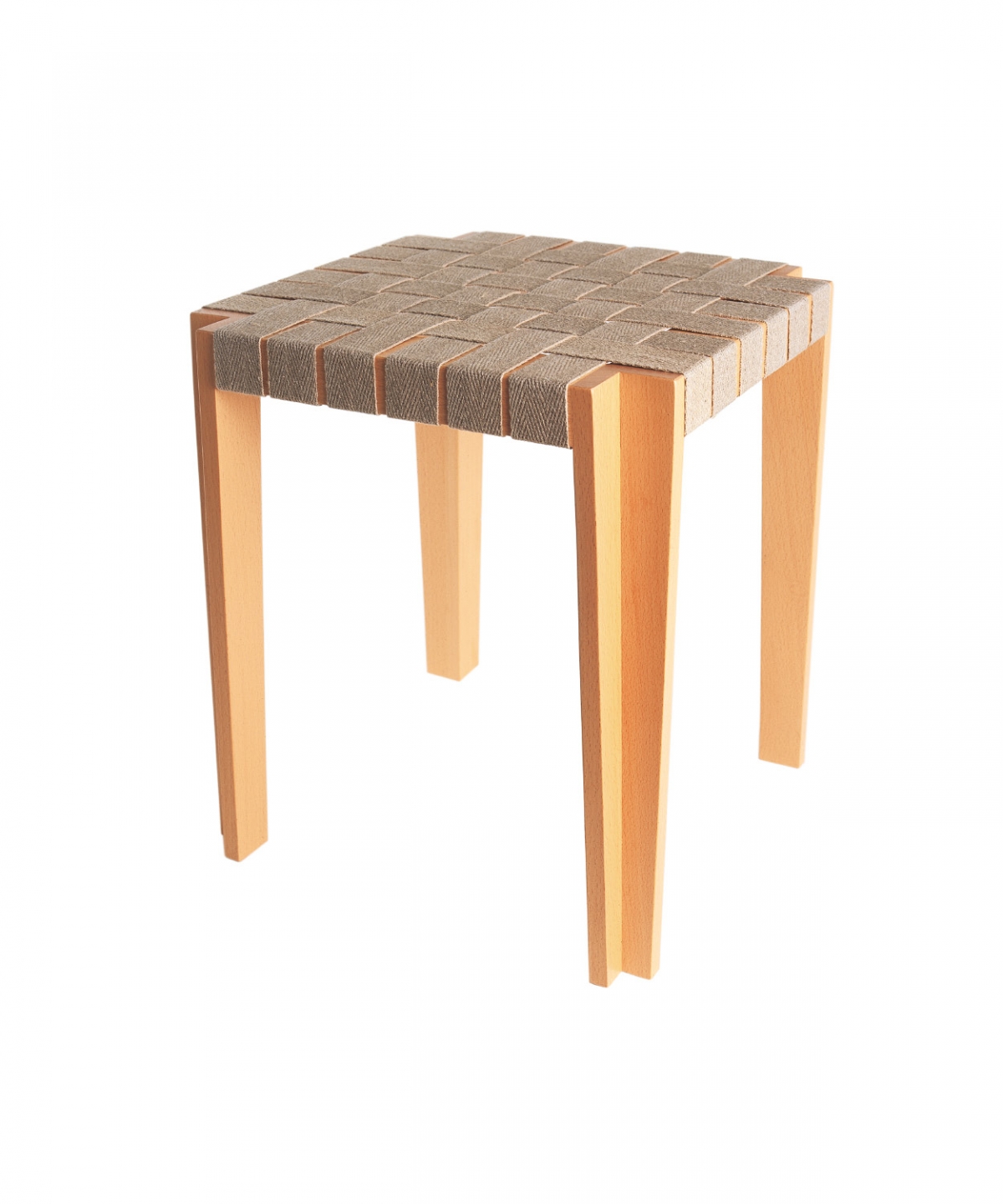 during this time many designers were forced to work within the war industry. Instead of designing furniture, their work was concentrated in the design of different products for the defence industry, often using new materials. This lead to a decline in the production of designer furniture up to 1945. Thereafter production rose again due to experiences drawn from the war.
With my stool illustrating the forties, I have emphasised the sense of function and new materials characteristic for the decade. Inspiration comes from Charles and Ray Eames, Bruno Mathsson, Hans J. Wegner and Gerrit T. Rietveld. 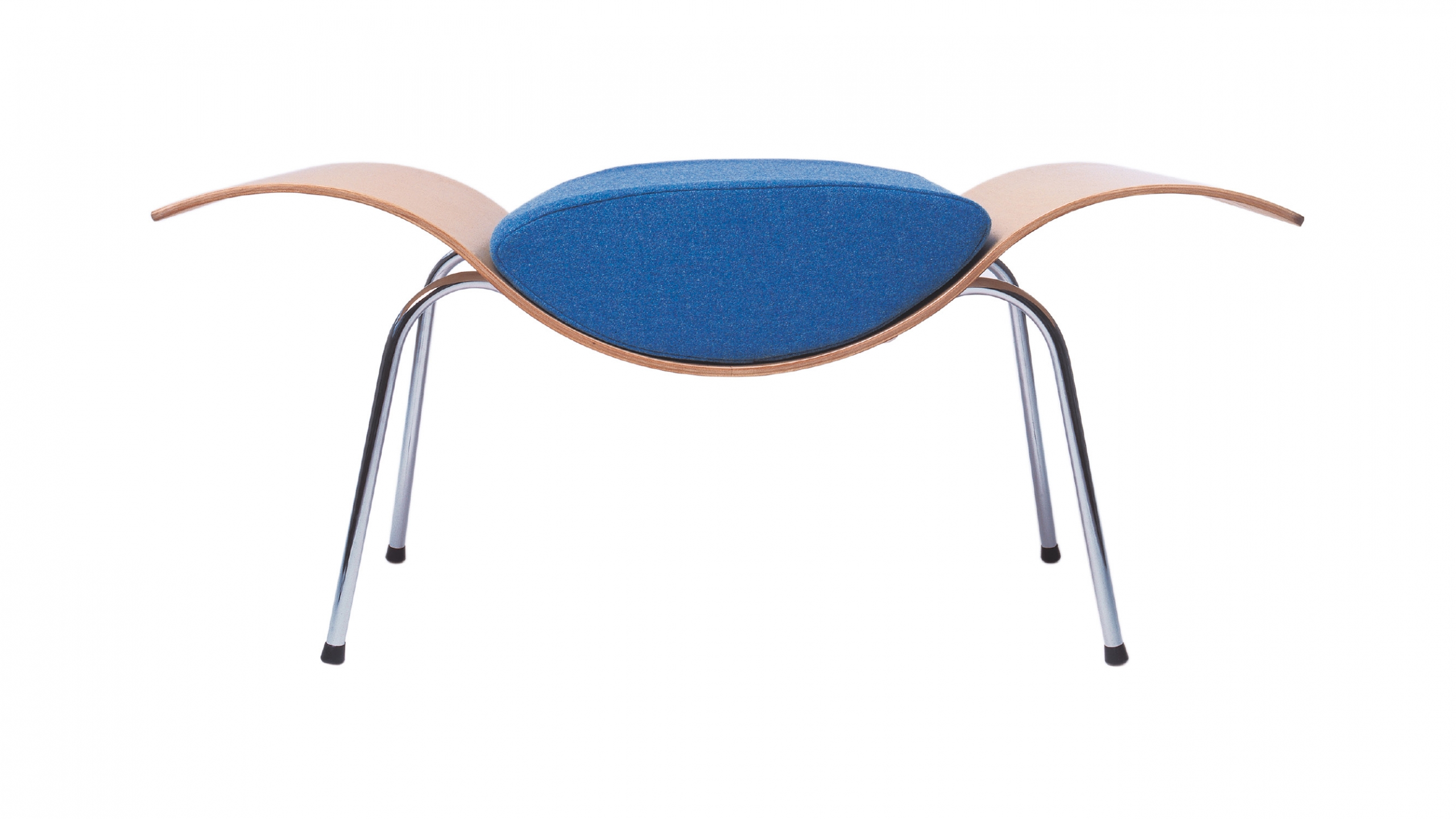 Scandinavian Design became a concept. Mass-production had been a succes in all parts of production. Designers were important to increase production and sales. The fifties were characterised by natural and organic forms. Furniture like ‘The Ant’, ‘The Swan’, ‘The Egg’, ‘The Coconut’, and ‘The Antelope’ are still classics today. The pressed wood was further developed in the fifties and it was used diligently.
To illustrate that period of time I have tried to creat an insect, which with its ease and firmness is ready to fly off into the air, using the pressed wood as its bearing wings.
Arne Jacobse, Eero Saarinen, Harry Bartoia, Charles and Ray Eames, George Nelson and Poul Kjaerholm belong to the great figures int hte foreground of the fifties.

Matrial: Pressed oak and steel-pipes. Seat is made out of foam and cloth. 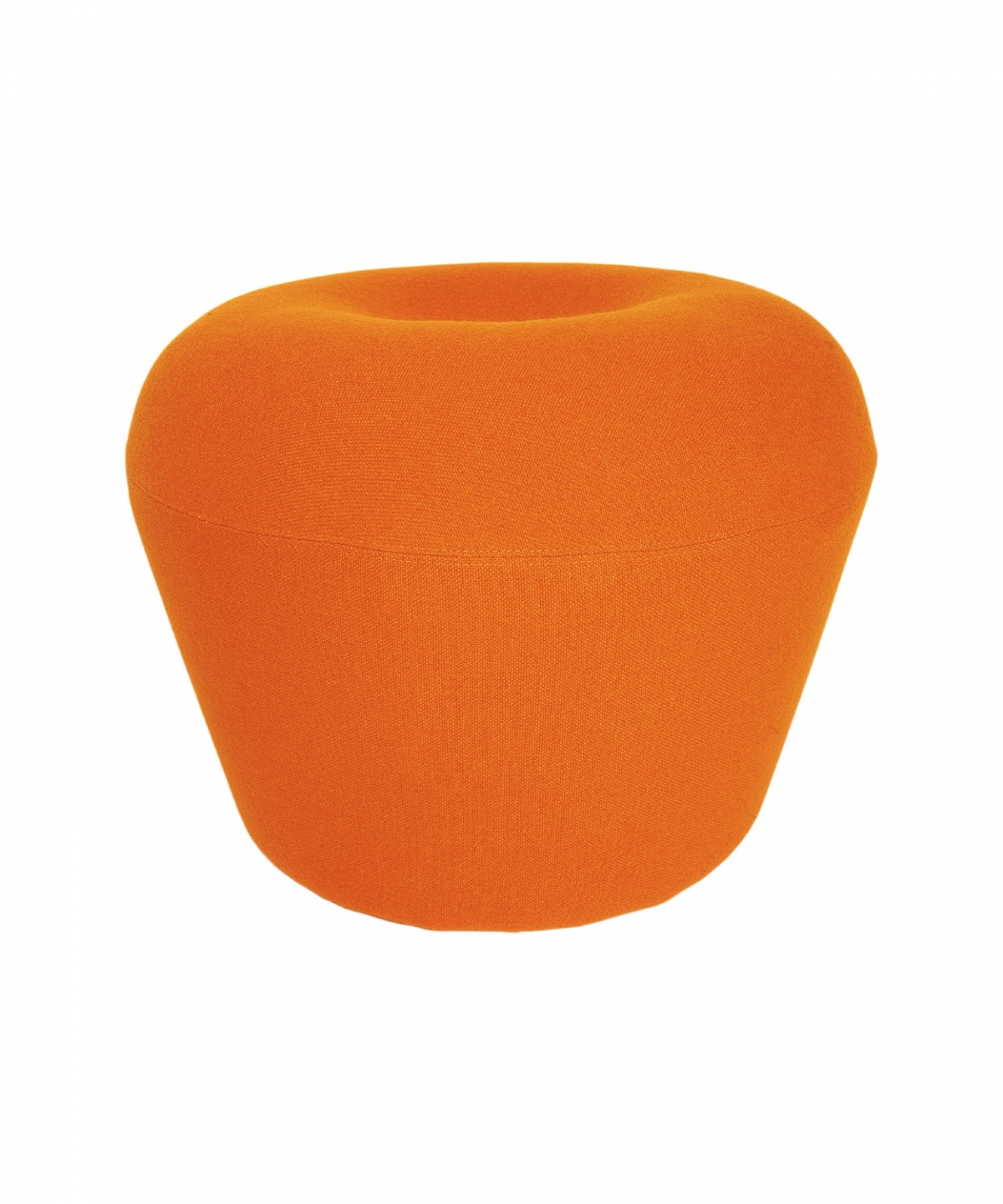 This decade was space-influenced, not least because of the human conquest of space and the first steps on the moon. Designers had never before played with objects like they did in the sixties. They created forms never imagined and they created styles which are considered cult even today. Plastic had its real break-through as well as furniture with upholstery in organic forms.
My inspiration is derived from Verner Panton, Eero Aarnio, Olievier Mourgue and Joe Colombo.

Material: Frame of plywood and foam, clad with cloth. 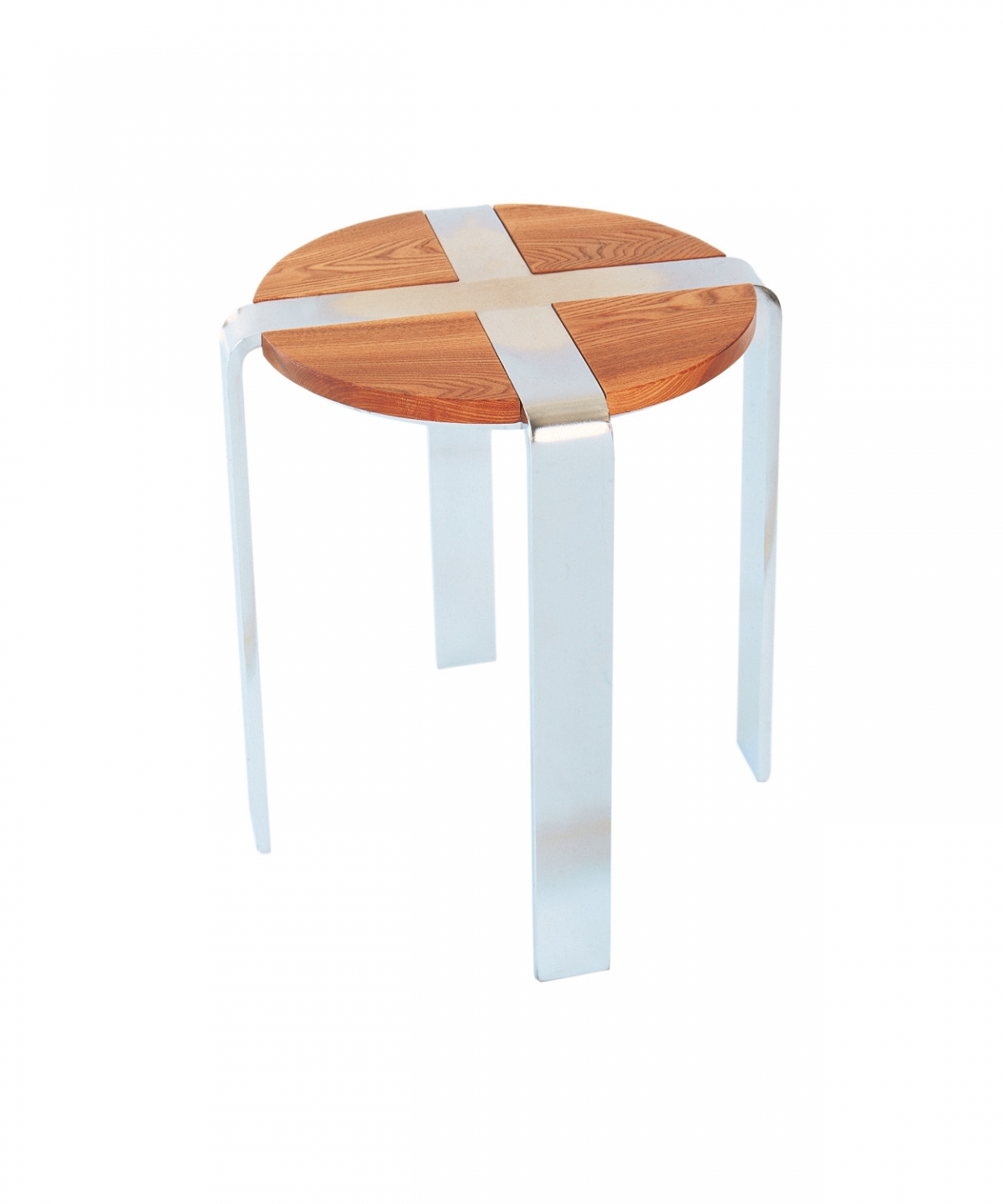 This period is hard to define, perhaps because the interest in design was rather sparse. Traditional Space Memphis might be an appropriate decription. Ergonomic design paved the way and designers started adapting their products to the interplay between man and his work tool. A strong earthly colour range was dominant. The materials were mixed but leather became frequent.
I found my inspiration int he more traditional forms by Rud Thygesen, Johnny Sörensen, Gijs Bakker and Achille Castiglioni. But if I had to give this stool a personality it would be John Travolta in the film ‘Saturday Night Fever’. 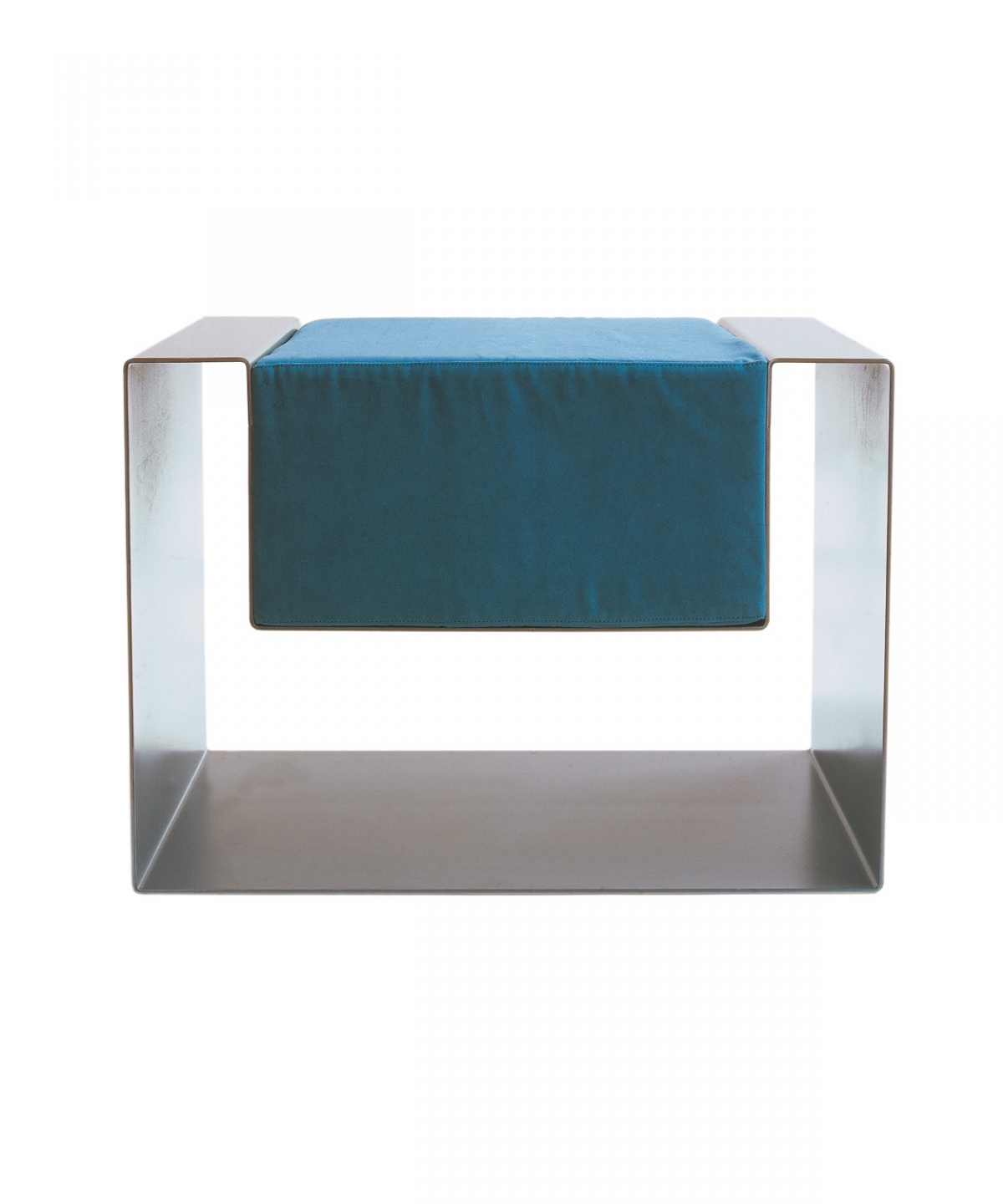 «Ugly» – would be many peoples’ reaction. «He who seeks shall find», and inspiration can be dound. The decade begins with Memphis, the dream was tos it and eat of top of a huge piece of candy in pink, bron and white.
After Memphis it became popular to use untreated material when making furniture, such as raw steel with fully visible welding.
Ron Arads ‘Well Tempered Chair’ is in my opinion vulgar, but I cannot help being inspired by it. Other sources of inspiration are Jasper Morrision, Shiro Kuramata, Tom Dixon and Maria Botta. 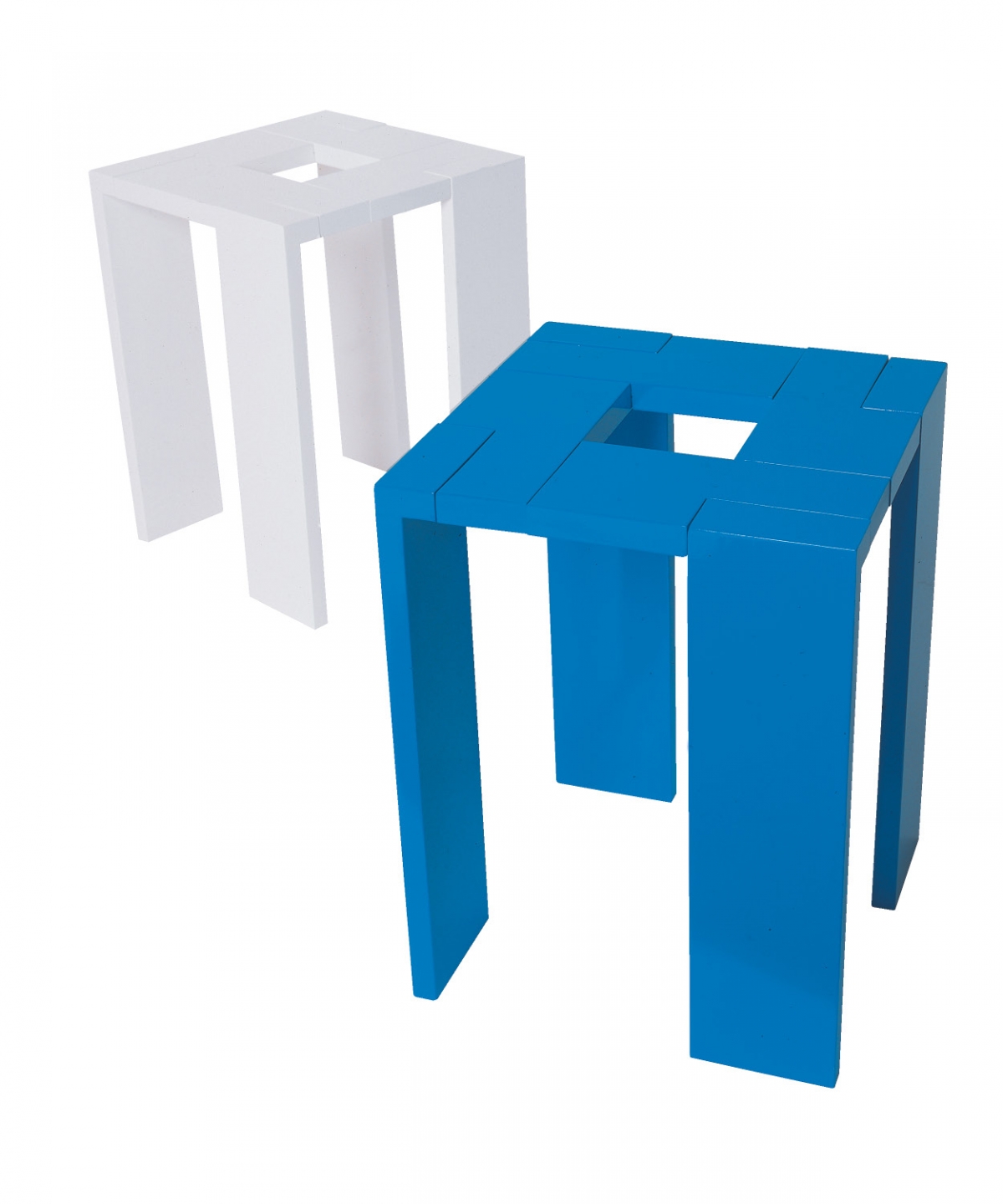 In the spring of 1997, during a Japanese seminar at Beckmans School of Design I suddenly had a revelation. The stage was taken by a Japanese architect, Shigeru Ban. He told us about his life and philosophy and about the furniture and houses he had designed. This man designs houses out of cardboard-pipes which could be assembled in one day. Not only are they cheap, low in material consumption and easy to transport, but also beautiful to the eye.
This corresponds to my image of furniture in the nineties – environmentally adepted, simple and low in material consumption. The stool consists of four simpilar pieces, assembled into a stable construction. 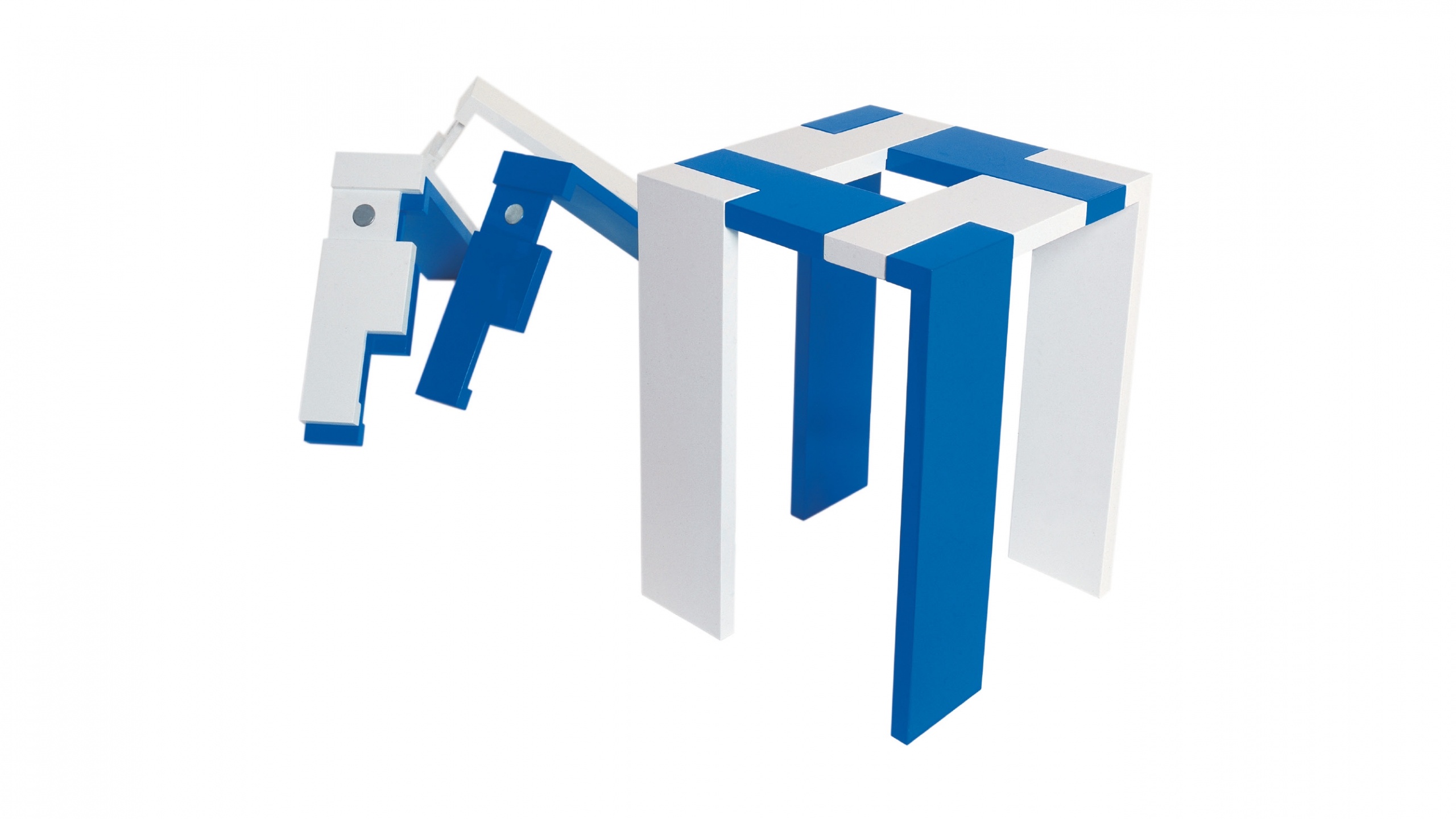